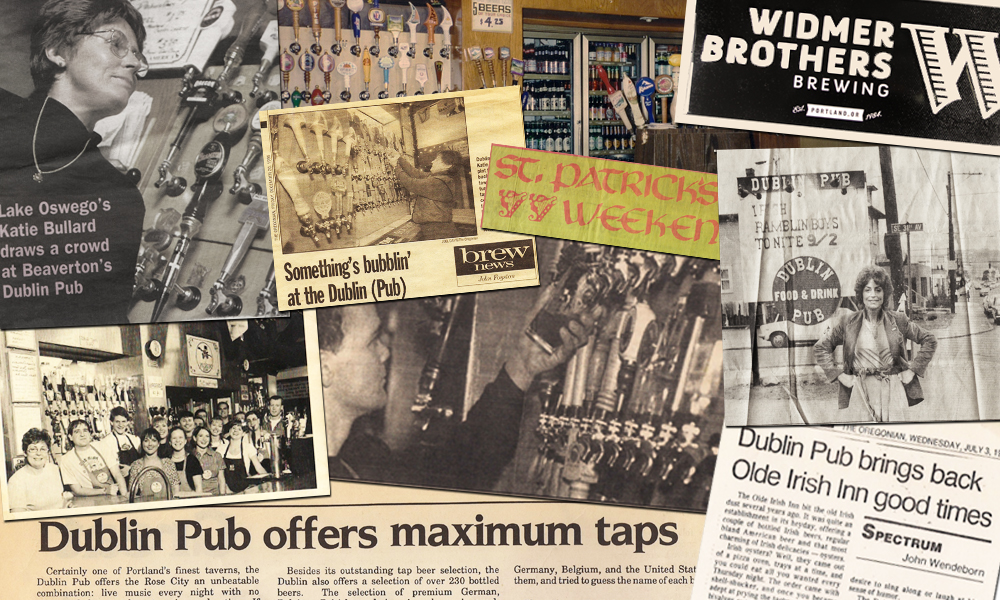 And the Birth Place of Widmer Brewing:

A place where everyone knows your name… It seems like the days of old, but at the Dublin Pub, they still cling to the loyalties and friendships they’ve made through the years.  For decades, beer has flowed through dozens of taps as the best live music Portland has to offer entertains patrons on the dance floor.  But did you know that the Dublin is also the birth place of the now renowned Widmer Brewing Co.?  High above the bar resides the proof… A special custom keg from Widmer with a plaque that reads “THANK YOU Carl Simpson for inspiring us to create and helping us to grow Widmer Hefeweizen“- Kurt & Rob Widmer.

Katie Bullard and Carl Simpson, original partners in the business, persuaded the Widmer brothers to craft their famous Widmer Hefeweizen, and provided the outlet that gave the brothers their first big start.  They asked the Widmer brothers to craft a light, easy drinking beer that wouldn’t be so heavy that patrons couldn’t have more than one or two. When the brothers came back, they introduced Katie and Carl to Widmer Hefeweizen, but something was missing… Katie wanted to put something on the rim of the glass as a final touch, but went back and forth between whether it should be a lemon or lime. After a quick trip to the store, Katie put a wedge of lemon on the pint of tasty brew, ultimately because the lemons happened to be on sale that day and less expensive than limes! Now, the whole beer loving world puts a lemon on their Widmer Hefeweizen because of a fateful day Katie had at the grocer! Here’s a link to the story of Widmer’s beginnings where the Dublin Pub and Carl are given credit to the creation of Widmer Hefeweizen: Widmer History

Years later, Carl passed away in 1999, but left an amazing legacy that will always be a major part of the Dublin Pub’s History.  He will always be fondly remembered, and forever in our hearts.  Katie has remained at the wheel ever since, and has been a steadfast carrier of the torch, bringing the Dublin Pub to new heights while keeping true to the old ways.
In the beginning, Katie started from a run-down saloon in SE Portland and then cleaned it up and renamed it the Dublin Pub.  To say it was a rough neighborhood would be the quintessential understatement.  But with a motherly spirit and an eye for truth beyond prejudices, Katie found diamonds in the rough and lives that just needed another chance.  She kept a 24 hour restaurant open for the hungry and thirsty, while inspiring and encouraging some of the roughest folk to find new hope and new passions.  Her efforts were quickly rewarded as she soon found herself with a loyal following, and then with the success that followed,  an opening of a new location on Beaverton-Hillsdale Hwy… and the rest is history!
Today, the Dublin Pub remains a central hotspot for nightlife, great brew, live music, and people that will remember your name.  It’s always been the personal touch, the caring heart, and the innovative spirit that has driven the success of the Dublin, and it’s here to stay.